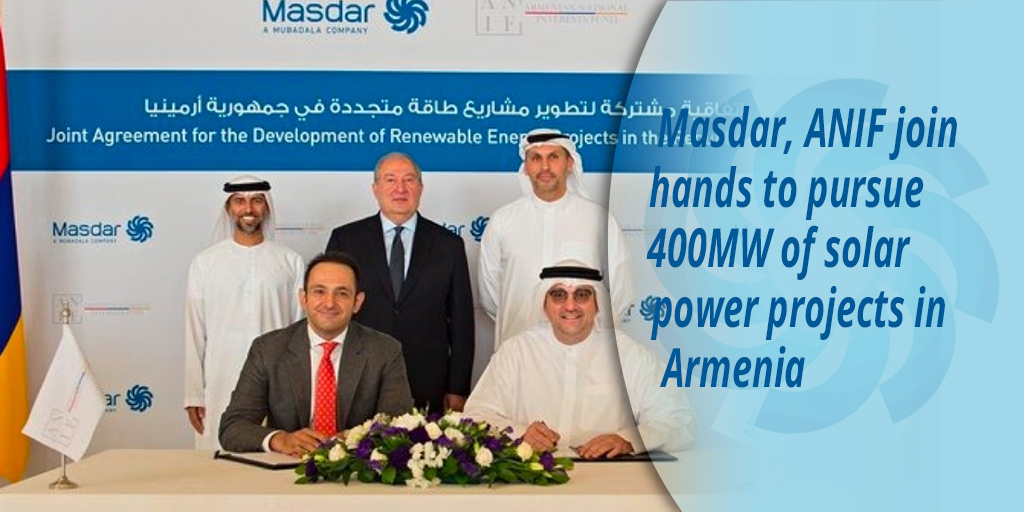 Masdar, one of the world’s leading renewable energy companies, has entered into a formal agreement with the Armenian National Interests Fund, ANIF, to develop solar power projects with a total capacity of 400 megawatts (MW) in Armenia, an investment of between US$300 million and US$320 million into the Armenian economy.

Today’s ceremony follows the signing of a memorandum of understanding, MoU, in July between Masdar and ANIF for the origination, development, construction, operation and maintenance of renewable power plants, including fixed and floating solar PV and wind energy.

The first project planned under the JDA is a 200MW utility-scale solar photovoltaic (PV) plant in the west of Armenia that will use cutting-edge bifacial technology to produce electricity from both direct and reflected sunlight.

Armenia has pledged to generate 30 per cent of its electricity from renewable sources by 2025 and has the potential to integrate as much as 1,000MW of solar energy. Today it has around 2,800MW of installed power capacity, evenly distributed between nuclear, hydro and thermal generation from imported natural gas.

Armenia receives an estimated 1,720 kilowatt-hours (kWh) of solar energy per square metre, compared with an average of 1,000kWh per square metre in Europe. Many of Armenia’s 200-plus rivers and lakes are also suitable for floating solar power projects.

"It is a great honour to sign this agreement today with our colleagues at the Armenian National Interests Fund, in the presence of President Sarkissian and our leadership at Mubadala, to reaffirm our commitment to Armenia and the achievement of its renewable energy goals," said Al Ramahi.

"Armenia is a fast-growing economy with an increasingly open and supportive environment for inward investment," added Al Ramahi. "That is an important reason why we have been able to move forward in our partnership with ANIF so swiftly."

"As a global renewable energy leader active in more than 25 countries, and with a growing presence in Central Asia, Masdar has extensive experience in developing commercially successful projects in solar, wind, waste to energy and sustainable real estate. As today’s signing illustrates, we are eager to explore the many ways in which we can share this experience and expertise with our partners in Armenia, a country with considerable untapped potential for both solar and wind power."

Armenia has small and mid-size solar PV plants already in operation, with a combined capacity of 50MW, another 250MW worth of solar projects licenced for construction, and a total of 700MW planned.

"Masdar and ANIF are making good on their promise to deliver industrial-scale renewable energy projects in Armenia," said Papazian. "Our two teams have gelled as a single unit over the past few months, and I am happy to report that we have sent a highly competitive written proposal to the Government of Armenia which outlines the details of the 400MW of solar PV that we are jointly proposing."

A full member of the Masdar City-headquartered International Renewable Energy Agency, IRENA, since 2010, Armenia has pledged to generate more than a quarter of its domestic power needs from renewable sources and hopes to cap its carbon emissions at 633 million metric tonnes of CO2 equivalent between 2015 and 2050.