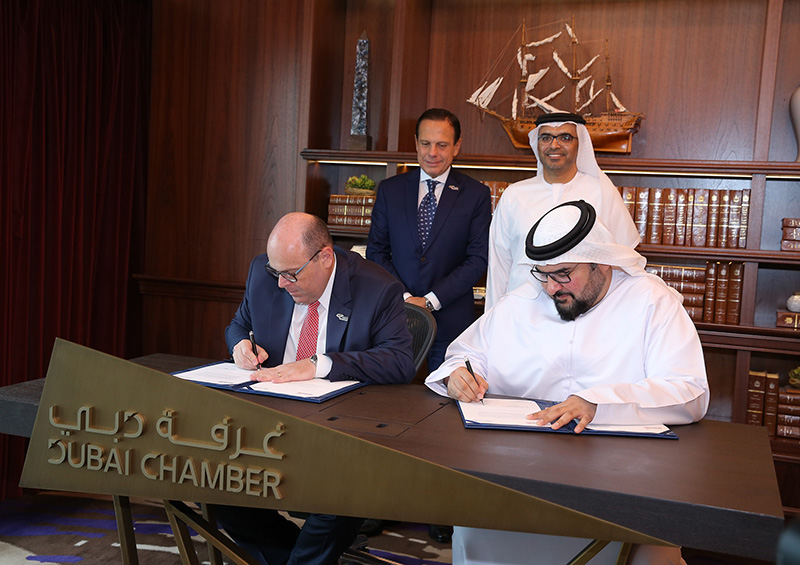 – H.E. Doria: UAE has become one of Sao Paulo’s top trading partners as the country receives 25% of the Brazilian state’s exports

Businesses in Dubai and Sao Paulo can by exploring untapped trade and investment potential in key sectors and areas of mutual interest such as agri-business, technology, innovation, transport and logistics, according to officials speaking earlier today at the Dubai-Sao Paulo Business Forum.

The forum, held at Dubai Chamber of Commerce and Industry’s premises, was joined by a high-level delegation from São Paulo led by H.E João Doria, Governor of Sao Paulo State, as well as public and private sector stakeholders from the UAE and Brazil. H.E. Doria and the visiting delegation were received by H.E. Majid Saif Al Ghurair, Chairman of Dubai Chamber; Dubai Chamber board members, officials and directors.

Following a private meeting, Invest São Paulo, the investment promotion agency of Sao Paulo state, signed a memorandum of understanding with Dubai Chamber that aims to facilitate cooperation and knowledge sharing between the two entities and business communities. The agreement was signed by Wilson Mello, President of the Invest Sao Paulo and Omar Khan, Director of International Offices at Dubai Chamber.

Addressing delegates at the forum, H.E Joao Doria noted that the trade mission to the UAE is the largest of its kind to be led by Sao Paulo’s government as 50 business leaders and 6 Secretaries of State joined the delegation.

H.E. Doria highlighted Sao Paulo’s expanding trade ties with UAE, and revealed that 25 percent of Sao Paulo’s exports were bound for the UAE in 2019, while 30 percent of the Brazilian state’s imports came from the Gulf country. He added that the UAE has surpassed Italy to become one of Sao Paulo’s top trading partners.

In addition, Sao Paulo Governor invited UAE companies to participate in major agri-business exhibitions taking place in Brazil and called on Emirates Airline to add an additional flight to Sao Paulo, which he says, would be key to further boosting bilateral ties.

For his part, H.E. Al Ghurair stressed the significance of the forum in creating channels of cooperation and open dialogue between government and business leaders from Dubai and São Paulo. He highlighted synergies shared by Dubai and São Paulo as leading business hubs for their respective regions, and explained the crucial role that Dubai Chamber’s representative office in Sao Paulo is playing in facilitating bilateral trade and investment.

H.E. Al Ghurair described the Dubai Chamber-Invest Sao Paulo agreement and the inauguration of investment promotion agency’s new representative office in Dubai as important developments that will take UAE-Brazil economic ties to the next level.

“Dubai Chamber is building strong relationships in Brazil, and our representative office in Sao Paulo is a testament to our efforts to expand trade links with the Latin American country. We are fully committed to provide all necessary support to ensure that relations between Dubai and Sao Paulo continue to develop and flourish in the future,” added H.E. Al Ghurair.

In addition, Omar Khan, Director of International Offices at Dubai Chamber, briefed delegates on Dubai’s economy, as well as the various competitive advantages that the emirate offers foreign companies and investors.

Brazil is one of Dubai’s largest trading partners in Latin America with bilateral non-oil trade reaching $1.5 billion in 2018. There are more than 130 Brazilian companies registered with Dubai Chamber.