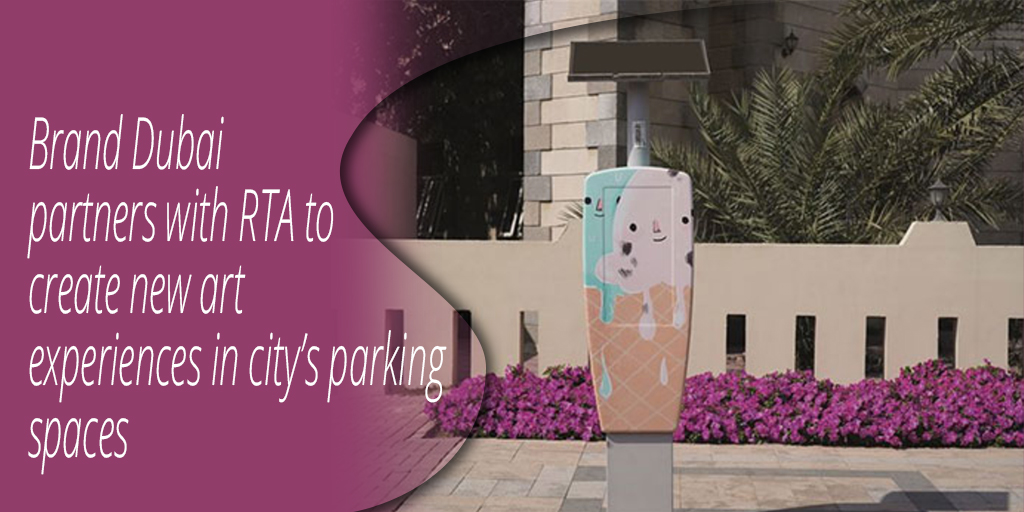 Brand Dubai, the creative arm of the Government of Dubai Media Office, announced that it is partnering with the Roads and Transport Authority (RTA) to launch a project to creatively revitalise parking spaces in key areas of Dubai. The project supports Vice President and Prime Minister of the UAE and Ruler of Dubai HH Sheikh Mohammed bin Rashid Al Maktoum’s vision of transforming the city into an open-air museum that enhances the city’s aesthetic environment.

Executed in collaboration with six Emirati and expatriate artists, the project is part of Brand Dubai’s efforts to enhance the creative ambience of public spaces in Dubai and initiate new connections with the community through art.  Around 100 parking meters in Jumeirah, Dubai Media City and Al Mustaqbal Street have been enlivened with 15 artworks inspired by the themes of diversity and tolerance. The Parking Metres project is part of the #DubaiSpeaksToYou initiative, which aims to create unique aesthetic experiences for people as part of converting the city into a canvas for art and creativity.

Rowdah Al Mehrizi Director of Marketing and Corporate Communications, Roads and Transport Authority (RTA) said: “RTA is pleased to combine its strengths with Brand Dubai to implement a new project that will help reinvigorate the environment around parking spaces. RTA is committed to supporting the vision to convert Dubai into an open air museum that enhances the happiness and well-being of the people of the city. We are keen to work with other organisations in Dubai to enrich the creative atmosphere that Dubai offers to both residents and visitors. Through this project we seek to artistically transform parking spaces so that the public can engage with these areas in new meaningful ways.”

“RTA has recently embarked on a journey of brand enhancement and part of this activity have changed the colour of parking machines to blue to make them compatible with the new RTA brand purpose: Make. Move. Transform. The blue color , is used in communication elements to reflect various mobility modes and hints at  transparency , innovation and reliability which are some of our brand attributes. The color blue is now being used to represent the Parking Machines as well . The colour red is used to communicate various sovereign services like licensing services, salik , smart applications and host of other services that are delivered through various channels,” added Al Mehrizi.

Shaima Al Suwaidi, City Branding Manager, Brand Dubai said: “The project, implemented in partnership with RTA, is consistent with Brand Dubai’s objective of infusing a new creative vitality into Dubai's urban environment, further enhancing its status as one of the world’s most cosmopolitan cities. We seek to create unique artistic experiences that make public spaces in Dubai more vibrant and engaging. The project is also part of our efforts to use art to forge a positive identity for various neighbourhoods in our city. We believe such projects can play an instrumental role in inspiring innovation and broadening people’s perspectives, while also attracting new visitors and investment into our city.”

Fatma Al Mulla, Project Manager of the Parking Metres project, said: “We have brought together a group of Emirati and expatriate artists to create a series of art experiences that will highlight Dubai’s vision for an inclusive society.” The experiences have been curated to transport residents and visitors from everyday life into the realm of imagination and beauty. The artworks feature motifs and icons that celebrate Dubai’s multicultural character, and its identity and values, she added.

Brand Dubai, the creative arm of the Government of Dubai Media Office, develops initiatives aimed at enhancing Dubai urban environment to reflect its emergence as one of the world’s most developed, fastest growing and culturally diverse cities. Brand Dubai’s initiatives are aligned with the directives of His Highness Sheikh Mohammed bin Rashid Al Maktoum to transform Dubai into an open-air museum in partnership with government entities, developers, artists and designers. Brand Dubai develops, launches and implements projects focused on the creative side of Dubai's development and its rise as a global hub for innovation.