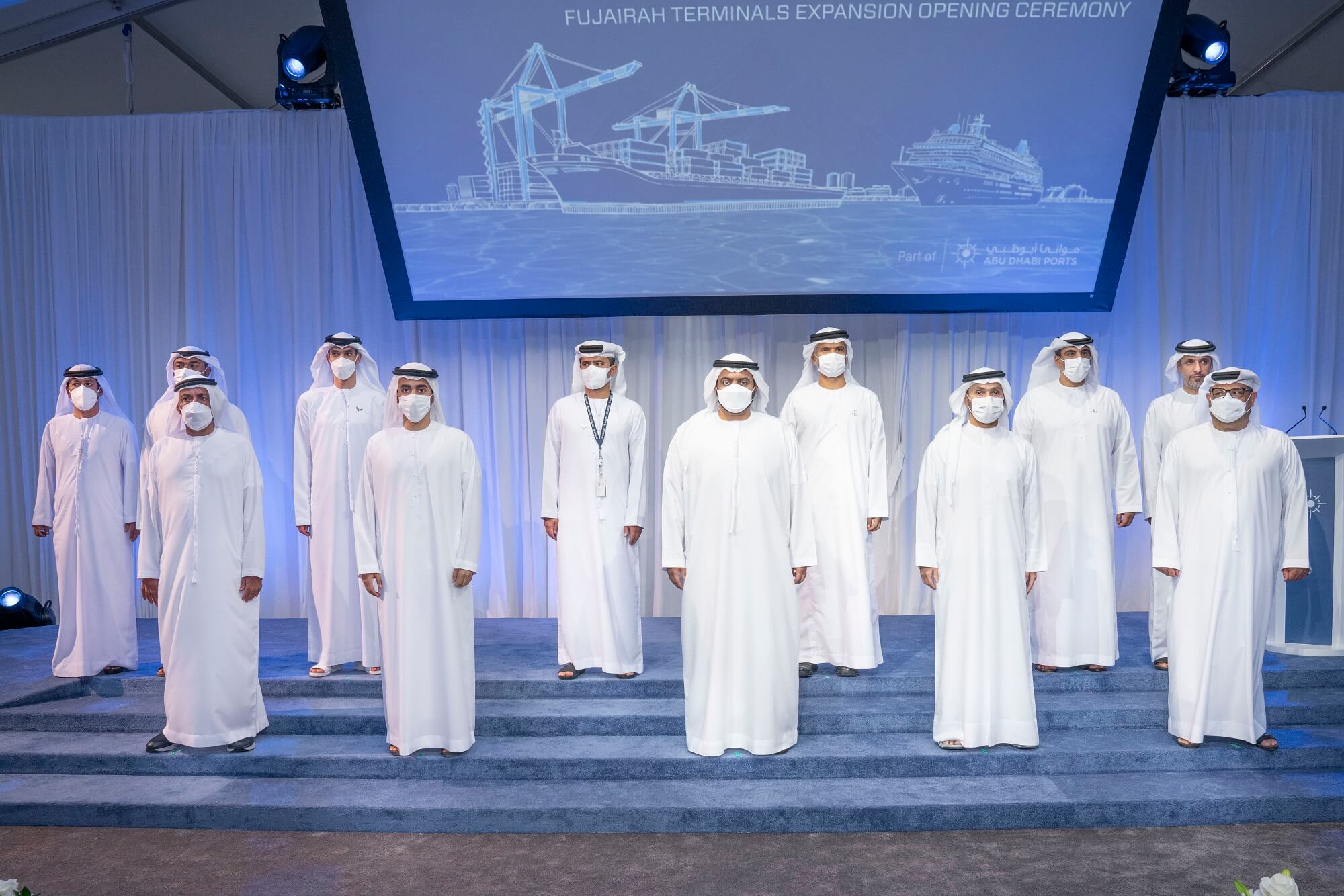 Founded in 2017 as a strategic centre for international trade in the emirate of Fujairah, Fujairah Terminals is part of Abu Dhabi Ports, the region’s premier facilitator of logistics, transport, and trade.

Wholly owned by Abu Dhabi Ports, Fujairah Terminals has now passed a critical milestone in its long-term AED 1 billion programme for the development of multi-purpose terminal facilities within Fujairah Port.

The completion of the expansion works, which commenced three years ago, will increase the terminal’s general cargo throughput to 1.3 million tonnes, multi-purpose area of 25,000 sqm for general cargo and Ro-Ro services, and increase container capacity to 720,000 TEU, with a total of 110,000 sqm of container terminal area.

In addition, the quay wall has been extended from 760 to 1000 metres and the approach has been deepened from 12 metres to 15 metres to enable the port to handle larger vessels.

H.H. Sheikh Mohammed bin bin Hamad Al Sharqi highlighted the stature of Fujairah Terminals as a leading global maritime destination due to its advanced infrastructure and its capacity to receive all sizes and categories of ships, tankers and shipments.

”The emirate of Fujairah has become a leading international maritime transport centre, due to the directives of H.H. Sheikh Hamad bin Mohammed Al Sharqi, Supreme Council Member and Ruler of Fujairah, as well as its strategic geographic location, enabling it to attract investment and support the national sustainable development process,” Sheikh Mohammed bin Hamad said.

The development of multi-purpose facilities at the port is in line with the ambitious Fujairah Strategic Plan 2040, and its advanced infrastructure and enhanced services will support the comprehensive strategy aimed at enhancing its stature as a key centre of facilitating trade between Gulf Cooperation Council (GCC) countries, India, the Red Sea and East Africa.

Captain Mohamed Juma Al Shamisi, CEO, Abu Dhabi Ports, said: “This is an important day in the maritime history of Fujairah and we are very proud to share the results of so many people’s hard work with H.H. Sheikh Mohammed.

Fujairah Terminals is part of Abu Dhabi Ports, owner and operator of 11 ports and terminals in the UAE and Guinea, facilitating global trade and building capacity.

Located on the UAE’s eastern coast outside the Strait of Hormuz, and providing a strategic link between east and west, Fujairah Terminals lies in proximity to one of the largest bunkering hubs in the world. Capable of accommodating the largest breakbulk vessels, the facility is equipped with extended bonded warehousing and covered storage capacity.

Fujairah Terminals offer an outstanding multipurpose facility located at Fujairah Port delivering a range of services for local, regional, and international customers with the dedicated support of Abu Dhabi Ports and its subsidiaries covering: