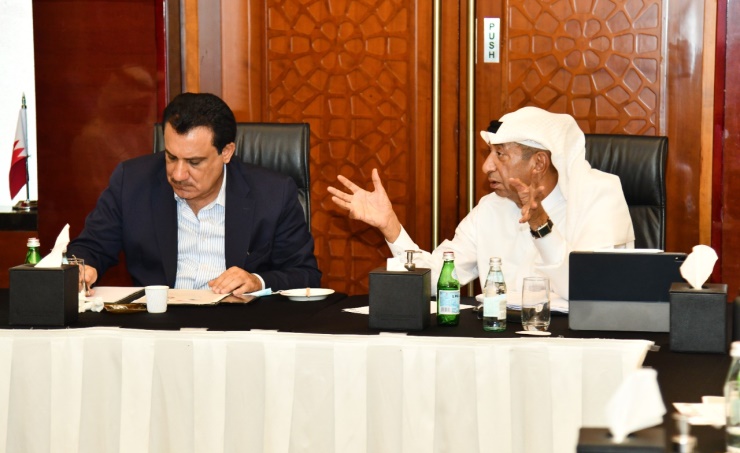 Chairman of the Federation of the Gulf Cooperation Council Chambers (FGCCC), and Chairman of the Bahrain Chamber of Commerce and Industry (BCCI), Sameer Abdulla Nass, has stressed Bahrain’s keenness to strengthen economic and trade relations with Iraq in order to serve the business sector in the two brotherly countries, praising the solid deep-rooted bilateral relations and the shared desire to further develop them at all levels.

Nass made the statements while meeting the Chairman of the Federation of Iraqi Chambers of Commerce, Abdel Razzak El-Zouhairy, in the presence of BCCI’s First Deputy Chairman, Khalid Najibi, and CEO, Shakir Al-Shater, on the sidelines of the 131st board meeting of the Union of Arab Chambers, held here.

BCCI chief underlined the importance of expanding areas of bilateral cooperation to serve the interests of the two brotherly countries and peoples in the fields of trade and investment, pointing out that the Iraqi market is very important for Bahraini exports, citing the growth of these exports by up to 47% in 2020 compared to 2019.

Nass highlighted GCC countries’ serious desire to increase their economic and investment cooperation with Iraq, as the basis for more development and progress in the Arab region.

He indicated that Iraq should benefit from the advantages of GCC economies, adding that GCC states should launch food security projects in Iraq to meet their needs in this regard.

He also affirmed the importance of removing all obstacles facing trade exchange between GCC countries and Iraq.

Chairman of the Federation of Iraqi Chambers of Commerce expressed his country’s desire to bolster economic, trade and industrial cooperation with Bahrain, lauding the kingdom’s political, economic and trade strides, and stressing the importance of broadening Iraq’s cooperation with it in the trade and investment fields.

El-Zouhairy praised his fruitful meeting with BCCI’s delegation, noting that it has provided an opportunity to discuss the best means to activate trade and economic cooperation with Bahrain.

He expressed hope that the commercial movement between the two brotherly countries will be spurred, and more joint investment opportunities will be created.